If you’ve been imagining yourself making a home in Weehawken’s iconic Avenue Collection or Henley on Hudson, consider this your last chance to manifest that mental picture. That’s because these two condominium communities on the Hudson River waterfront are nearing close-out status.

These two developments by Lennar Urban have proven to be the sweet spot in Weehawken’s recent renaissance, a pair of lifestyle-defining destinations with Manhattan skyline views, a resort-worthy amenity package and luxury finishes. It’s no wonder that Henley on Hudson’s 201 residences and the 103 homes at 1200 Avenue at Port Imperial have quickly captured the attention of homebuyers. 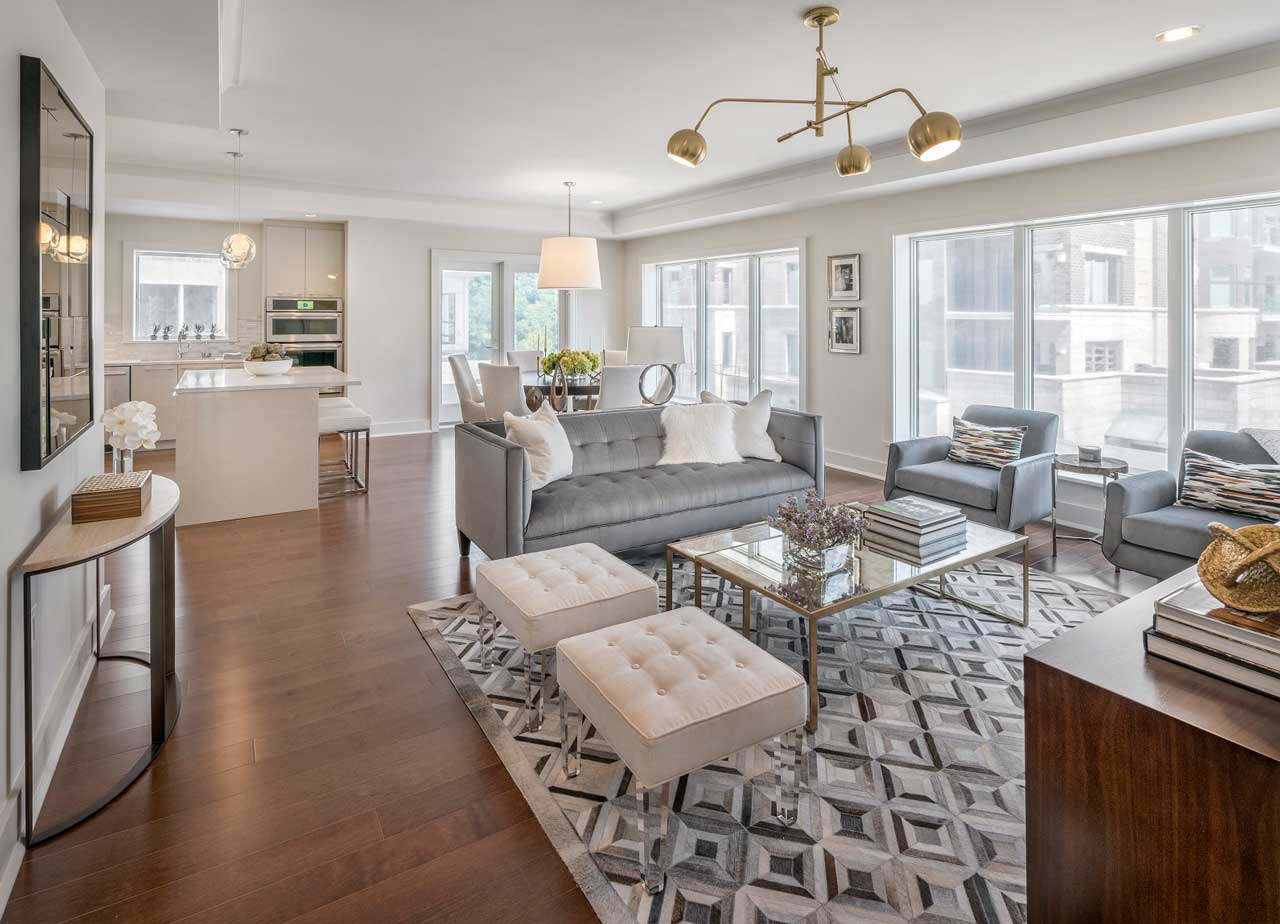 At Henley on Hudson, construction is now fully complete and the last remaining homes are available for immediate occupancy. At 1200 Avenue at Port Imperial as well, inventory is dwindling — and even the model homes are being snatched up. One furnished model and two staged homes remain available for tours, however.

These two communities are emblematic of everything that has driven the Weehawken wave: a more low-density development philosophy that prioritizes open space, emphasis on access to mass transit and, of course, the one-of-a-kind postcard perspective of midtown Manhattan enjoyed from directly across the river.

The Weehawken waterfront is the best of both worlds, quieter and calmer than places like Hoboken or Jersey City but still offering plenty of dining, shopping and recreation within walking distance. And no discussion of Weehawken would be complete without mentioning the recent reduction in tax rates from 2.23 percent to 1.49 percent, making this one of Hudson County’s lowest-taxed locations. 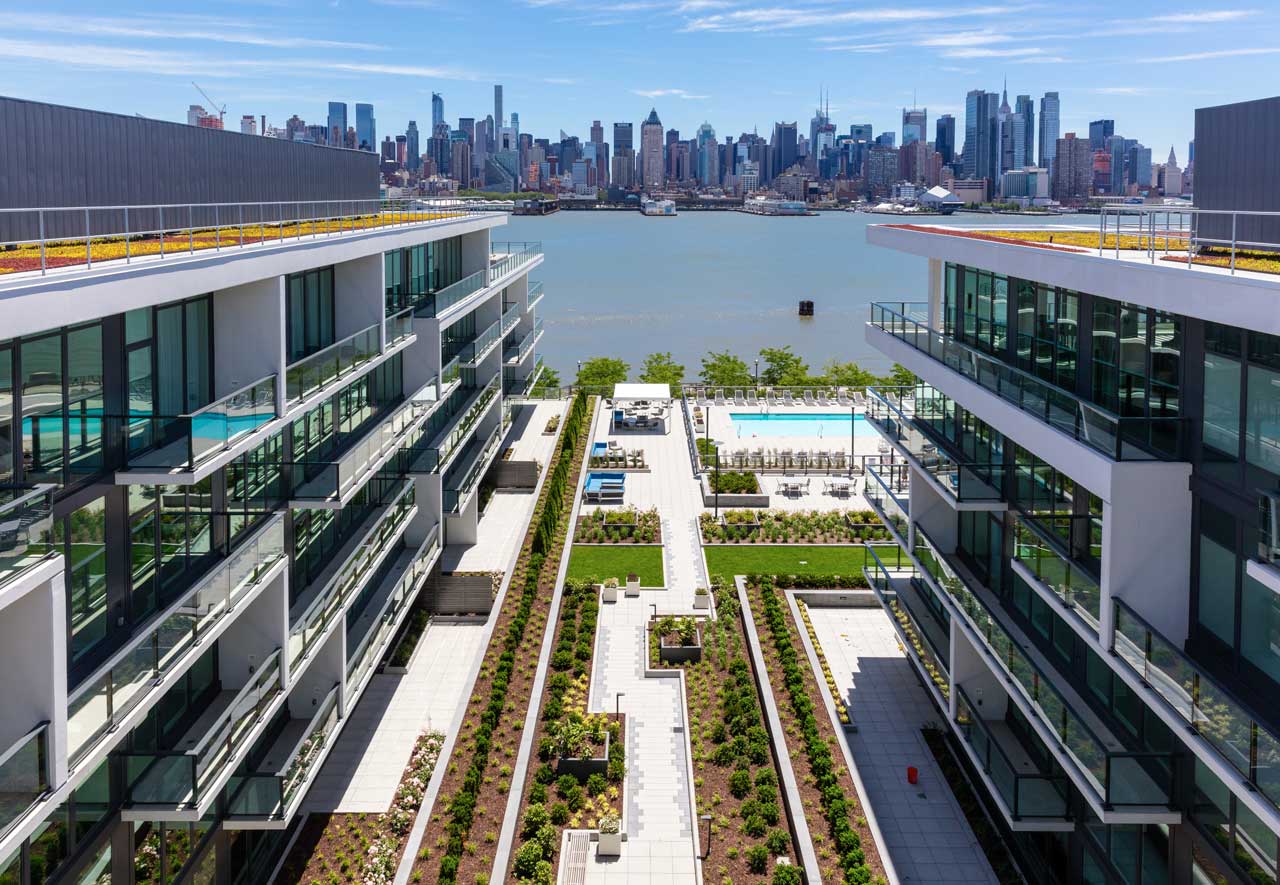 Henley on Hudson’s remaining homes range from $979,000 to $2.5 million for one, two, or three bedrooms and 1,165 to 1,964 square feet of space. Each layout is a single level, and some boast balconies or terraces to maximize view enjoyment. Convenience is maximized as well thanks to smart home technology that automates lighting, climate control and entertainment. 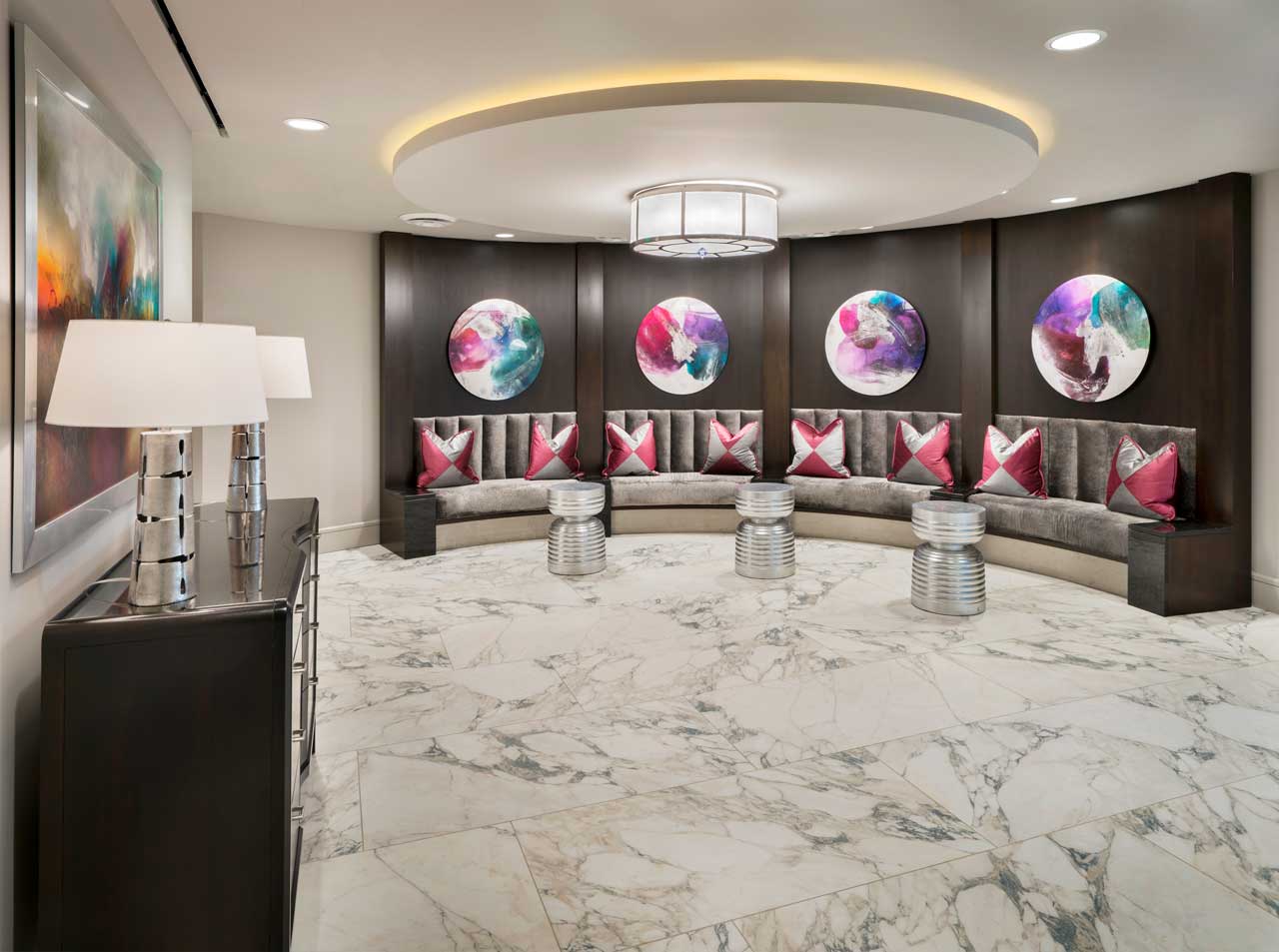 The lobby at Henley on Hudson

Residents at Henley on Hudson may avail themselves of copious private amenities. Work up a sweat in the cardio fitness room. Relax in the lobby lounge or outdoor garden terrace. Or let the kids be kids in a playroom. Don’t forget about the 6,000-square-foot Club at Henley, a clubhouse that includes a billiards and gaming lounge, theater room and fitness center with yoga and Pilates room, children’s play studio, and a patio that reveals a fire pit and infinity-edge swimming pool worthy of a luxury resort getaway.

Half a mile away, 1200 Avenue at Port Imperial’s remaining two- and three-bedroom condominiums are priced from $1.499 million to $3.75 million. Homes are flush with fine finishes, including gourmet kitchens with GE Monogram appliances, granite fireplaces, and Brazilian chestnut hardwood floors. Most homes include outdoor space — as much as 484 square feet worth. 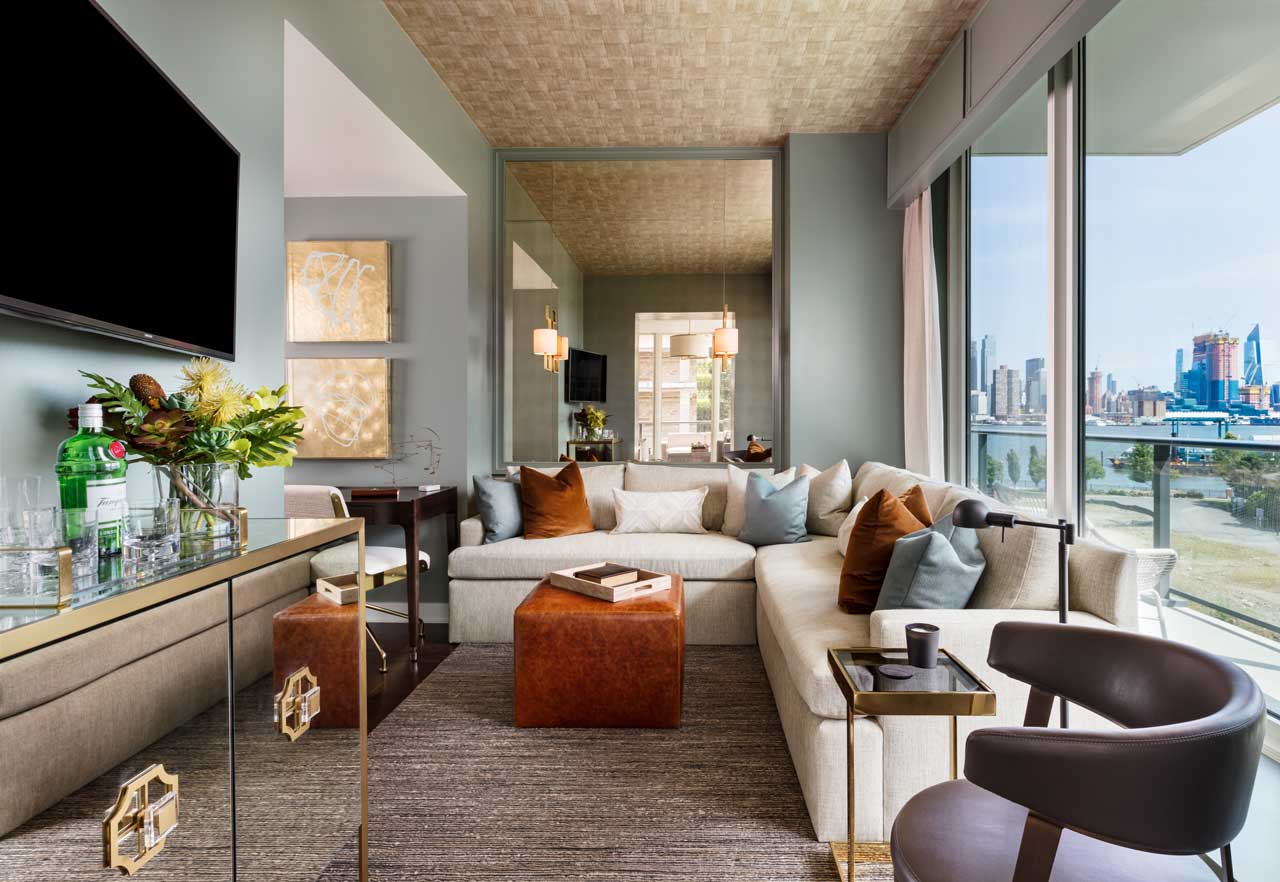 Here, residents can enjoy hotel-style amenities and services from the minute they walk into the grand salon lobby. There’s a library lounge for focusing free of distractions and a media screening room for distractions. The fitness center includes sauna, steam showers and locker rooms. Overlooking New York City from the seventh floor is the property’s showcase amenity: the Skyline Social Room, which combines a lounge, kitchen, bar and multiple social areas that include a fireplace, televisions and a sound system.

On the third floor, step outside and discover a landscaped plaza that gives way to an open-air amenity space with a sun-shelf swimming pool, gardens with a fire pit and motorized shade trellis, and a catering bar. 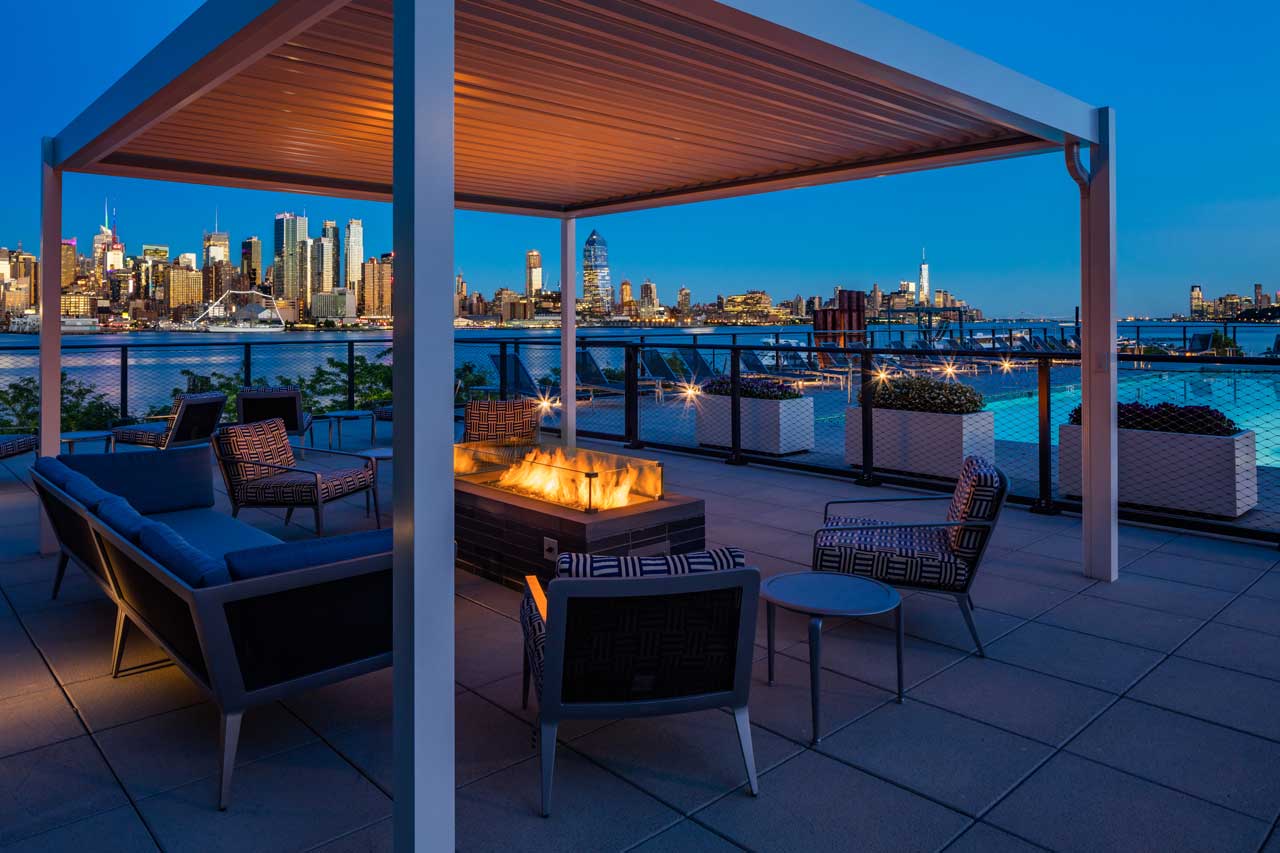 Both communities are commuter friendly, with the Port Imperial Ferry Terminal and its 10-minute ride to Manhattan easily accessible from both. The Hudson-Bergen Light Rail offers access to Hoboken and Jersey City, while the PATH train and Lincoln Tunnel are each minutes away themselves.

Learn more about Henley on Hudson at HenleyonHudson.com, or visit TheAvenueCollectionNJ.com for information about 1200 Avenue at Port Imperial. Prefer the phone? Pick it up and dial 201-210-0099.