145 President is a collection of 17 Scandinavian-inspired residences set amid the historic townhouses of Carroll Gardens.

When the developers of 145 President were deciding on a design theme for the 17-unit, seven-story condo building, they researched the Carroll Gardens neighborhood and wanted to connect with the neighborhood’s strong ties to Europe.

“We love that there is a touch of European flair,” says Millie Perry, associate broker at Stribling, which recently launched sales for 145 President. “The neighborhood celebrates Bastille Day, the International School is nearby on Court Street, and the local public school has had a French immersion program for a decade.” To provide a suitably international exterior  — while blending in with the surrounding townhouses — the developer, Avery Hall Investments, chose handcrafted brick from Denmark.

Inside, they maintained Scandinavian inspiration: clean tones and simple lines. The white oak flooring and cabinetry are echoed by tundra grey marble countertops. 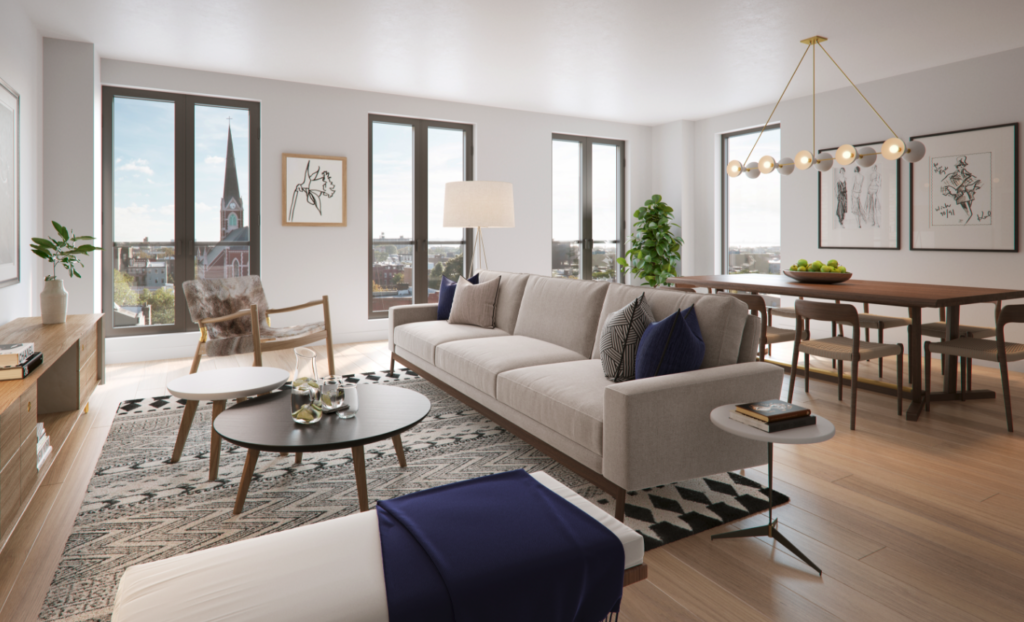 All of the 17 residences at 145 President — except for one two-bedroom home — have three or four bedrooms. Eight of the homes include a private terrace or balcony with French door-inspired windows.

Amenities include a small fitness center on the lower level with a Peloton bike, residents’ library, virtual doorman and package room. There will be a private storage unit included with every home, and the building offers bike storage. The 1,500-square-foot roof terrace provides views of midtown and downtown Manhattan. And there’s a parking garage with 14 spaces available for purchase — at grade, which lends more elevation and views to the second-floor residences. It’s close to the F and G trains at the Carroll Street stop and green space at the ever-popular Carroll Park. It’s also close to many of the neighborhood’s celebrated Italian food shops and eateries, including Mazzola Bakery, Esposito & Sons Pork Store and Ferdinando’s Focacceria.

Occupancy begins in August 2018. Currently, there is a design gallery on the block, with renderings, floor plans and a built-out kitchen. Sales and marketing are being handled by Stribling Marketing Associates. For more information visit the 145 President website.